"Feelings are strange. They can be soft and round or harsh and jagged. They're always in your heart, but you can never touch them. I can't help but feel like my feelings are who I truly am. They're hard to put into words. But the reason I was able to be myself...was because my older sister was there for me. Because you treasured my feelings...because you treasured me. Right, Sis? That's why I..." -Hiori Hirahara

A Blu-ray release of the series was planned but has been cancelled.[1] Crunchyroll announced that this series will receive an english dub which will premiere June 7. Crunchyroll also revealed the cast and crew.

This is a story of connecting shining emotions.

Joy, sadness, anger. Feelings are a power, invisible to the eye, that every person possesses. Sometimes this power is even capable of changing the world.

Hirahara Hiori always has a positive attitude and can't leave people in trouble alone. Hanari Ruka is socially awkward, she wants to get along well with others, but she doesn't know how to go about it.

How will the meeting of these two wildly different girls change not only them, but the world itself?

An spin-off of the TV anime with characters from Blue Reflection Ray in chibified form. Focused on showing their daily lives, with comedy in contrast with the situations that are seen in the main story. The series is posted on their official Twitter, and as well the DMM Picture YouTube Channel. 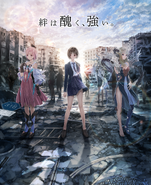