Kasuga Shiho is one of the Main characters of Blue Reflection Tie.

A girl who appeared in front of Hoshizaki Ao and others for some reason. She is a gentle and serious honor student. She loves caring and she is good at household chores. She also lost Memory, but Utsubo Kokoro seems to know Shiho.

Shiho is a kind and gentle girl. Upon arrival at the academy, she takes up the role of being the primary cook of group. She and Kokoro has an unbreakable childhood relationship.

Shiho and Kokoro were apparently childhood friends. It is learnt that the two had a treehouse, which bullies destroyed, leaving Shiho devastated. She appears in the story when Kokoro remembers a memory of her when a snack stand is constructed on campus grounds. Like the others, she doesn't remember anything but her name, leaving Kokoro devastated because she couldn't remember her best friend. Soon afterwards, her Heartscape appears and we learn that she and her parents owned a cafe before. After getting her Fragment back, Shiho remembers her friend and they reconcile with each other off-screen. 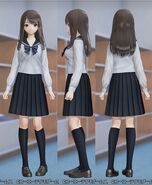