Kinjou Yuki is one of the Main characters of Blue Reflection Tie.

A girl living at school with Utsubo Kokoro and Miyauchi Rena. She is cheerful, energetic and lively. She's a mood maker, and she spends her days looking for fun in this extraordinary situation.

She too has lost her memory.

Yuki's story is rather tragic. In her past life, she was joyful and happy, and loved playing with her friends and even playfully annoying her girlfriend, Rena. When Ash started coming down from the sky, Yuki was one of the younger ones to get diagnosed with Ash Syndrome. Because of the endless days staying up in the hospital for her symptoms, she began developing internal despair and depression because she was isolated from her friends and family members, but she masked it well by pretending to be joyful in front of her treating professionals.

One day, due to either not understanding Yuki's personality, couldn't treat her anymore or both, her doctor transfers her to a specialist hospital for continued treatment. Before she is transferred, she knew her time was short and tells her nurse to tell Rena to forget her and move on, leaving Rena searching for answers. She eventually arrives at the specialist hospital, but due to confidentiality, the doctors couldn't disclose which room she was in. Soon after, Yuki slipped into her despair and passed away. In her Heartscape, we learn that she was reborn as a double agent for the World System, as it has given Yuki's soul a second chance, providing that it places a tracer inside her rebirth soul.

Yuki expresses that she puts on a mask because she didn't want to remember her past life due to it being nothing but despair. Yuki gives the others a chance to destroy her Oasis self because she believes that that would prevent the World System from tracking them, but instead, Rena and the others shower her with love and forgiveness. Rena and Yuki then pick up on where their relationship left off on, with the others giving them privacy. 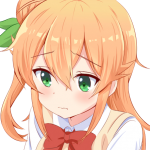