Miyauchi Rena is one of the Main characters of Blue Reflection Tie.

A girl who lives at school with Utsubo Kokoro and Kinjou Yuki. She tends to take things negatively, with many thorns in her words but gentle roots. She always takes a step back and looks at the whole thing, and it's her job to rush into the members who tend to run away. She has lost her memory with Rena.

Along with Kokoro, she is one of the original students in the academy when Ao arrived. Right away, she and Ao developed a sort of teacher-student relationship and she seems to care for her in the manner. She apparently doesn't know what she did before coming here, but apparently, we learn from her Heartscape that she tried to save Yuki from dying from Ash Syndrome, when she applied for an organization that is researching the Ash that is coming from the sky. She learns and tells Ao and the others that the Ash were sapping the life energy out of the human body, creating an incurable disease known as Ash Syndrome. Yuki developed the disease, leaving Rena devastated due to her falling romantically in love with Yuki and promising her that they would see the stars one day.

Out of despair and lack of hope, Yuki didn't inform Rena when she was transferred to a specialist facility more suitable to her needs. She thought she cured her when she arrived in Oasis soon after Shiho, but in Yuki's Heartscape, we learned that Rena didn't save her and she passed away, making Yuki's story the most heartbreaking in the whole story. 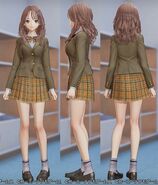