Saiki Yuri is a supporting character in Blue Reflection. She is a first year student from class 1-B of Hoshinomiya High with a preternaturally high IQ.

She later appears in Blue Reflection Ray, working for AASA. At this point, she is now a student at Tsukinomiya High (presumably as part of her cover).

While remarkably intelligent, Yuri does not experience emotions as strongly as some of her peers, leading her to often question herself. She is reserved and slow to make friends, but cherishes the ones she has.

Yuri has long, dark hair with straight bangs, and wears the winter variation of the Hoshinomiya uniform, with black tights and brown leather shoes.

Yuri's research into the Hoshinomiya and Tsukinomiya phenomenons offers invaluable insight to her employer. Yet, she struggles with simple day-to-day tasks. Having never been to a convenience store, she would rather employ elaborate schemes to sustain herself and her long hours of research, than to talk to someone face to face.

In her Ray story arc, Yuri is instrumental in recruiting several Reflectors for AASA, paving the way for events to unfold in Blue Reflection Tie. 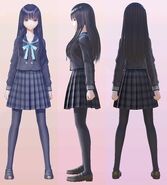