Utsubo Kokoro is one of the Main characters of Blue Reflection Tie.

The girl Hoshizaki Ao first met in a lost world. She always seems to be vacant at her own pace. She has a calm heart and she treats Ao who suddenly arrives kindly. She has lost her memory and is she originally a resident of this world? It's unclear if she or, like Ao, she got lost in this world. 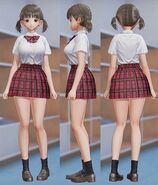